When I was eight years old, my family lived in a Latino community where anything "low" with wheels was the neighborhood aesthetic. Kids had lowrider bicycles, adults had lowrider cars, and bikers had choppered Harleys - wicked paint and crushed velvet ruled the world. The culture made a meaningful impression on me - especially Joey and Jesse around the corner, who had chromed-out lowrider bikes with chain steering wheels instead of handlebars - and, even though I was a kid in a hospital-like stainless-steel Everest and Jennings powerchair, there was little more I wanted in life than a "pimped-out" rig. My mother, in her infinite wisdom of always striving to create normality in my life as a child with a disability, set out to pimp-out my powerchair - I couldn't ride a lowrider bike, but by customizing my chair, at least I could have some sense of connection with the neighborhood flavor. After a trip to the local discount store to buy a few velvet towels, she spent a few evenings working on my chair, pumping the pedal of a second-hand Singer sewing machine, piece by piece covering the arms and upholstery with the velvet material from the towels. And it worked, the homemade velvet powerchair upholstery was a hit in the neighborhood, and gave me a greater sense of belonging - a priceless gift to a child struggling to feel normal when he knows he is different.

Here I sit 22 years later, a lifetime from the Latino neighborhood where we lived, and despite years of successful education, career, and family of my own, I'm struck - and inspired - by how I've held on to the unrecognized understandings that my mother and I shared, that a wheelchair can be celebrated, bridging gaps among people in the way a customized car or bicycle or motorcycle brings people together. And, so, here I sit as an eight-year-old in a 30-year-old's body, thrilled to show you the PPM (Purple Pimp Mobile), my buddy, Chris Art, and I have been working on, which, like all pimped-out rigs, is an ongoing project. 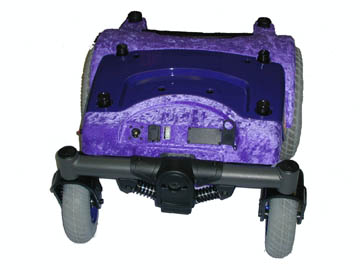 We started out with an early-model demonstration Blast that was returned to me. We put on some fresh parts - removing dings here and there - and had a good, sound unit. One of us suggested painting the rear wheels to match the shroud, which looked cool. Then, of course, the front casters had to be painted, as well (Paul, our paint pal, questioned our theme color of purple, but went along for the ride). The underchair neon lights, making the chair look like it's riding on a purple cloud, was my idea, installed by Chris, and wired by our pal, Frank. While at WalMart, of all places, I hit the jackpot and scored a few yards of purple velvet (which just so happens to match my purple velvet pimp suit - if you're ridding in the PPM, you've got to have clothes to match), and Chris did a Master's job of covering the rear and front body components. We all agreed the red suspension springs clashed with the purple, so Chris repainted them black. The result is a chair that Larry Flint, Elvis, Shaft, or anyone living in a mobile home would be proud of. 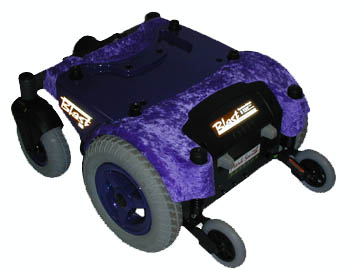 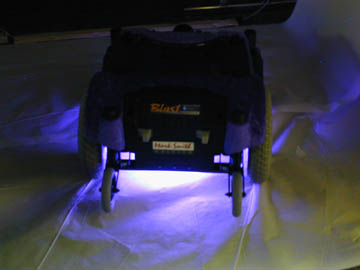 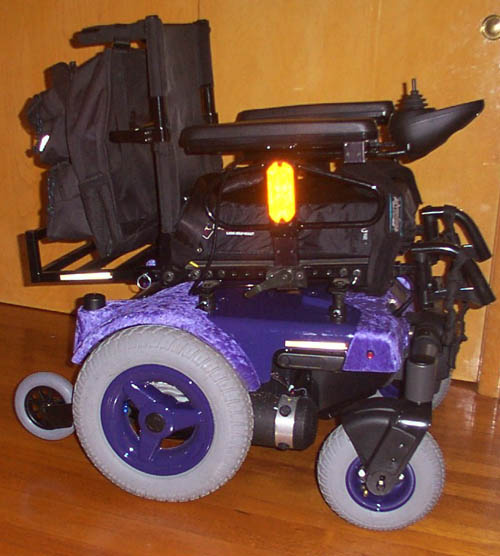 The chair is totally functional, and I use it - I'll even be traveling with it on planes in the coming days. Like most pimp mobiles, the PPM won't be out in the snow or heavy rain, but you can bet it's stylin' around town or out to dinner. In the end, though, as with when I was a kid, the PPM isn't only about a cool looking ride; rather, the PPM is about a couple guys coming together with absolute acceptance of each other, and celebrating life, whether it's walking, rolling, or covered in purple velvet.